A Life Member of the WBHS Old Boys' Association is someone who has been nominated as such by the Executive Committee in recognition of their service to the Association or to the School, and that nomination is then ratified at an Annual General Meeting or Special General Meeting by a majority vote.

As at 1 May 2015 the following Old Boys have been recognised with Life Membership:

There has so far been one recipient of an Honorary Membership and that was Bill Mallett in recognition of his services as Chairman of the Board of Trustees and also for his work in helping with the Jubilee, the Jubilee Fundraising Committee and the WBHS Old Boys’ Association Executive Committee. Bill was very active in the years 2002-2009.

If anyone has any queries about this information please contact the Old Boys office. 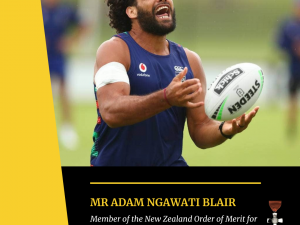 Adam Blair – Member of the New Zealand Order of Merit ››