You are here: Home » About Us » School Archives

A major part of the essence of the WBHS Old Boys' Association is to preserve the history of the School and make it freely available to all the School’s Old Boys. The School has a dedicated Archives Room where old records, photos and any historical documents are stored.

We are very lucky to have a former teacher in Don Gwilliam who maintains many of the records and photos albeit on a voluntary basis.

Don was a teacher for 30 years from 1973 to 2002 so many of you will have passed through his technical classes. He has an avid interest in photography so during his time here he took on the added responsibility of photographing as much of the School activities as he could, so we now have a myriad of photos from the mid-seventies to the current days.

Don does a lot of the work associated with looking after current school photos wherever they appear on walls in the School and just recently finished a time consuming job in realigning all the photos in the Carruth dining room. He has an indepth knowledge of the School’s history so if you need to know something about the School, Don can tell you, and if he can’t then it probably isn’t worth knowing.

One significant addition to the Archives has been the purchase of the massive collection of photographic negatives that were being held by Graeme and Dorothy Palmer. Many of you will recall that T G Palmer & Sons were the School photographers for many years and these negatives date back as far as 1924 and up to 1973. Don has taken on the task of developing each of these negatives so that we will have a permanent record that can be perused by Old Boys.

It was through Don and a group of Old Boys, the Class of 39 led by Lionel Ormandy, Doug Goodison and the late Peter Hegley to name a few, that the Assembly Hall has now been adorned with the annual Prefect, 1st XV Rugby and 1st XI Cricket photos. These date back as far as the early 1900s right up until the current day.

We are very pleased and grateful to receive donations or gifts of memorabilia items or photos to be stored in the Archives or to be displayed somewhere in the School. Currently we have a dedicated display case in the Assembly Hall in which we display some of the items that we have and those that might be of interest to students and the general public.

We do have some reliance on Old Boys in this aspect as many items have been lost over the years never to be seen again. So if you have any items that you think might be of interest or is of a historical nature please know that it would be most gratefully accepted by the Archives team here at the School. 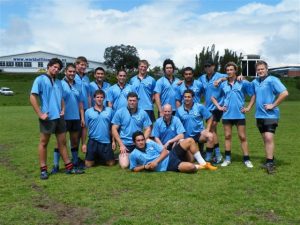