It is with genuine sadness that the Old Boys’ Association acknowledges the passing of former Headmaster Maurie Dean (1979 – 1992) on Sunday morning, 13th June.

Maurie replaced long-serving Headmaster Harry Clarke and quickly established himself as a strong and passionate advocate for the boys, the school, and Carruth House.  He was a strong believer in standards – from high academic standards to supporting the arts and cultural pursuits in the school, as well as pushing for sporting excellence.  Maurie loved his sport and was an enthusiastic tour party member of the WBHS rugby trip to Canada in 1992.

In 1981, Maurie helped organize the school Centenary and was responsible for starting the School Foundation, as well as the (initial) OBA – as a separate entity to the, (co-ed) Past Pupils Association.  Maurie was also the Headmaster that was at the helm when the 1st rebuild of the school started to gather momentum in the early 1990s.  Maurie’s career was, unfortunately, seriously hampered by ill health, and he ended up taking early retirement in his mid-50s before many of his plans and ambitions for the school could be fully implemented.

The OBA and all boys who were at school during his tenure as Headmaster pass on their sympathy to Maurie’s wife Margaret and the wider Dean whanau at this time of sadness and grief. 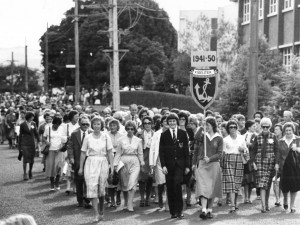